We hear the term “digital culture” everyday. Usually it is used with a negative connotation, describing a counter-revolution to traditional media delivery and consumption and the death of reading and writing as we know it. But what does the expression really mean and what is our place in this so-called “culture”?

Let me start by outlining what it is not. Digital culture is not the same as being digitally cultured. There is no doubt, our children are growing up more exposed to digital devices than ever before and at an ever earlier age. My children were born before the smartphone/tablet revolution, so it always intrigues me when I see toddlers out with their parents at restaurants with smartphone or tablet in hand. They have replaced books and plastic keys as the distraction devices of the new millennium. And from what I have observed, the practice is almost universal. In fact, just yesterday at the supermarket, a four year old was being pushed around in a trolley playing on his tablet allowing his mother the time to shop. I pass no judgement on this practice other than to use it as an example of children becoming more and more familiar with the use of digital devices, in other words becoming digitally cultured. You can read more about the possible impacts in this UK Telegraph article .

The concept of digitally cultured therefore connotes an ever increasing computerization and digitizatilation of society. It is as a result, that digital culture emerges. In his article, Participation, Remediation, Bricolage: Considering Principal Components of Digital Culture, Mark Deuze notes the main components of a digital culture as:

Whilst to Deuze, this may not be quite so radical as it sounds, to some of us it is a huge change in the way we relate to and engage with news and information. We may never have written a letter to a newspaper editor, done a stint on community radio or complained to the Publications and Media Ombudsmen in the past, but we are now blogging, tweeting and linking. Web 2.0 has brought us an easy and low cost way to do it all. And this not only impacts journalism and the way we consume news, but also impacts on product development, marketing, public relations, corporate communication and many other sectors of the economy.

Let’s have a closer look at blogging and see how that fits in with Deuze’s three components.

Examples of news and political blogs abound in the Australian context. In late 2011, Greg Jericho, the author of the Rise of the Fifth Estate and pro blogger at Grog’s Gamut, compiled this list of Australian political blogs. The 2013 winner of the Best Australian Blogs competition in the commentary section was AusVotes 2013, a compilation blog. Clearly, Australians who are not journalists are participating in political commentary by running and contributing to blogs. However, far from replacing traditional media sources, they act as a supplement to it. Would these bloggers or blogs have survived this long if traditional media sources were giving the public all they want in news delivery? They lend another voice to the debate, sometimes that voice is objective, sometimes not, sometimes that voice is in pursuit of a personal agenda, sometimes not. An Internet connection, a point of view and some very basic technical skill is all that participation requires.

According to Deuze, remediation:

does not necessarily mean different from or in radical opposition to, the mainstream or dominant ways of doing things, but rather an expression of a distinctly private enactment of human agency in the omnipresent computer-mediated reality.

What this means is that blogs sit alongside traditional media where public journalism is still practiced in corporate news groups. Blogs however rely more on Netiquette or a loose consesual way of reader and producer interaction whilst still building on notions of quality journalistic practice, such as credibility and legitimacy. They often address the experiences of people in a more meaningful way, taking the news story and targeting its relevance towards readers rather than to a demographic.

And finally, bricolage. This refers to the act of creating something new out of what is existing. Think remix, think tweaking and reassembly. Because of Netiquette, bloggers understand the interconnectivity of the world in which they operate. Linking to mainstream media stories, other blogs and refashioning blog posts to apply across different sites and platforms so as to reach different audiences are all part of the blogger’s tool box. Bloggers of value always however add their own opinions and analysis and as such appear to be talking to us. 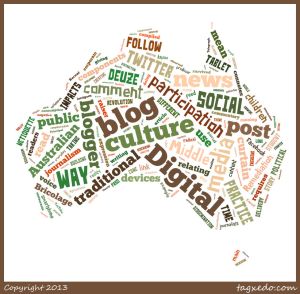 Digital culture gives us the freedom to create and publish, but requires us to live up to the responsibility of being discerning and ethical readers. It is indeed a brave, new world.

In what ways do you participate in digital culture? Are you a blogger? Do you prefer other ways of participation, such as microblogging on Twitter or news dissemination on Facebook?